On mission 3, how you ever noticed that one of the USMC AAVPs is destroyed while your unit is defending the village? The AIs that operate one USMC AAVPs was somewhat stupid and I thought they could prevent themselves from becoming causalities of war. I find that a little irritating because their support can prevent the village from potentially being overturned and swarming with Red Chinese troops.

I think that AAVP's loss is just for making Player to push and deal with spotter team at Antenna.
If you spare just few seconds between succesfull beach assault and going for Spotter Team, to observe AAVPs, you'll notice then even if Mortar shell doesn't drop directly on AAVP, it'll still blow up as if it was - so it's rather not AI problematic, but i think scripting. From what I remember when playing 3rd mission already with only 1 AAVP active you can easilly win. All you need is to remember paths of PLA troops running towards Taranay.
I guess the biggest issue here would be placing that Spotter team in mission time to make it more intense and therefore giving Player much more replayability concerning eventual loss of APC.
When you play it for the first time you actually don't see this, but after 3rd or 4th time you'll notice.
It would be obviously logical to be under Mortar fire as soon as going out of tree line and being exposed to team from Antenna, but instead they "seem to not notice" enemy squads attacking their own guys until they're only 200 meters away.
Cheers 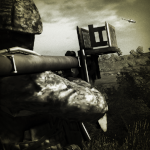 There are times when I don't like being vulnerable to flanks which I can't take care of and it can be covered by other AI teammates to prevent the unit from being overwhelmed.

Can you change the title of the theead please it seems a little mis guided to the topic.

Most active topics
Who is online?
In total there are 3 users online :: 0 Registered, 0 Hidden and 3 Guests